Have you guys heard my new soundcloud mix?

ShiZaru.Zoe and Andrew Morphous have a pretty classic burner story. They met in the Big Apple at Disorient’s Bioluminescence party in February of 2009 where they quickly realized they shared a common bond. Andrew had been dabbling in music since 1996 but took his hobby to the next level in 2001, becoming an audio engineer and producer. ShiZaru grew up playing jazz horn and singing, but didn’t keep up with it as an adult. What linked these two together? Their incredibly deep appreciation for bass culture and their desire to get more involved in the bass community.

After discovering their reciprocated passion in one another, the duo launched into creating their own bass music together. The Tsunami Bass Experience was born – self-described as live fusion bass music, they never play the same thing twice. Originally on the laptop and controller tip, the crew has since

branched out to using a Doepfer, an analog synthesizer using Theremin antennas, which has helped to evolve their sound. Shizaru sings and plays jazz horn, layering the organic and the digital for a unique experience every time. The two have also incorporated this duality and layering in their logo, which depicts the dual wave particle theory, mathematically plotted out representing the shift from potential to kinetic energy.

Aside from their own music, ShiZaru & Andrew are also dedicated to bringing appreciation for all bass culture to the playa. Their quest began in 2011 when they built the Tsunami Bass Experience theme camp and art installation – effectively the Tsunami Bass Experience art collective. The installation is a Hokusai-inspired 25ft crashing wave sculpture with a body sonic dance platform. The platform itself is only between 8 to 12 inches off the ground, but it’s what’s underneath the plywood base that really matters. Beneath the unassuming structure are low frequency transducers that allow for frequencies lower than human hearing to travel up your body and literally shake you. What are ShiZaru and

Andrew attempting to accomplish with this seemingly strange non-listening musical experience? They would like you to rethink your perceptions of music and instead have a fully kinesthetic response to bass. But what is it like? Shizaru tackles this one, “It’s designed to help people feel the music.  It really must be experienced. We can talk about it all day long but until you’re standing on it, you can’t really get it.” The crew books DJs in blocks allowing for lots of cross collaboration and although they love having a good time, there’s no bar at Tsunami Bass Experience. They like to provide a proper showcase for producers and DJs (and, they assured me, there are plenty of bars nearby for your refreshment if you get thirsty from all that bass).

Tsunami Bass Experience is coming back to the Playa this year, ready and raring to go. They hope to transform from the “little sound camp that could” into a large international camp with some members coming from as far as Australia. They’re placed right in sound camp central at 10:00 & J so if you’re in that neck of the woods (which you will be, of course!) then you should definitely stop on by and experience the Wave for yourself.  They currently have an open call for bassmaster DJs that would like to try their hand at spinning the epic Wave, elevating their lowest beats to a new level (you can PM Shizaru through their Soundcloud page or on Facebook).  Their only requirement- “that you wobble their booty”. If you’d like to check out

the Tsunami pre-playa, they’re hosting a fundraising event called Peepshow tomorrow, Saturday August 4th at Brooklyn’s Red Lotus Room. The festivities include a full line up of talented burlesque performers and bass loving DJs plus Party Liberation Front’s Conway Jennings will be coming up from Virginia to spin his electro swing crunk! Or, if you won’t be heading to the Playa OR NYC any time soon, you can check out the Tsunami Bass Experience Soundcloud – they just happen to be BARmag’s musician of the week!

Global Glue Project Encourages You to Get Stuck

Global Glue Project was inspired by the founder's great-grandparents who were married for almost 75 ...read more

"When it came down the espresso machine was the only thing left standing and everyone ...read more

There is no bad entrance to a burn. No matter what time, no matter how ...read more 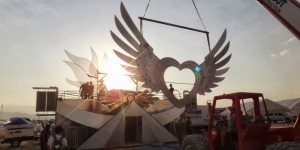 The only constant at Burning Man, besides the dust and bacon, is change. Without  movement ...read more 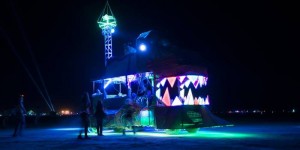 How Weird Is Weird? Asking Weird Questions To Weird People at How Weird 2014

I was asked by BAR Mag to interview attendees of one of my all time ...read more