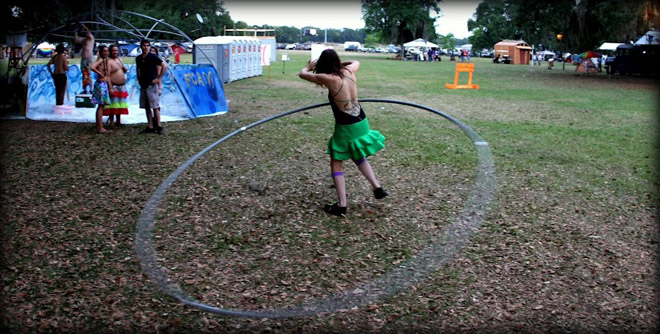 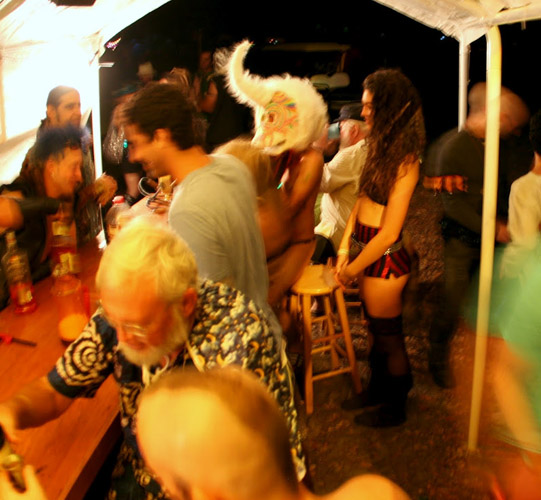 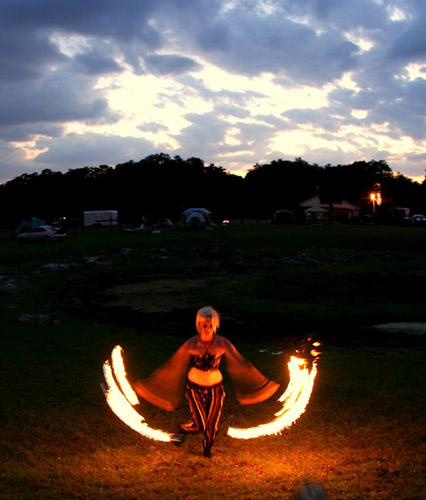 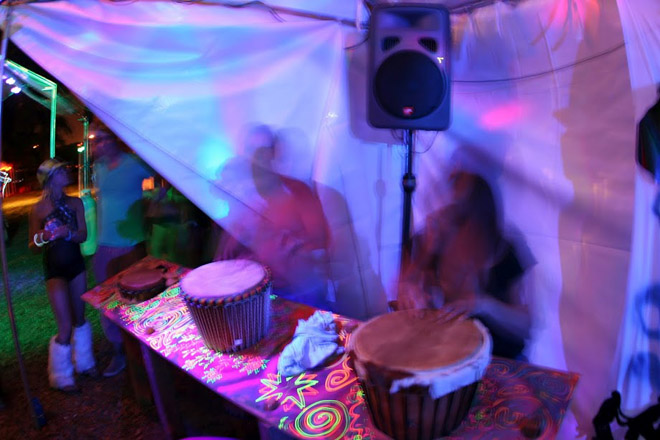 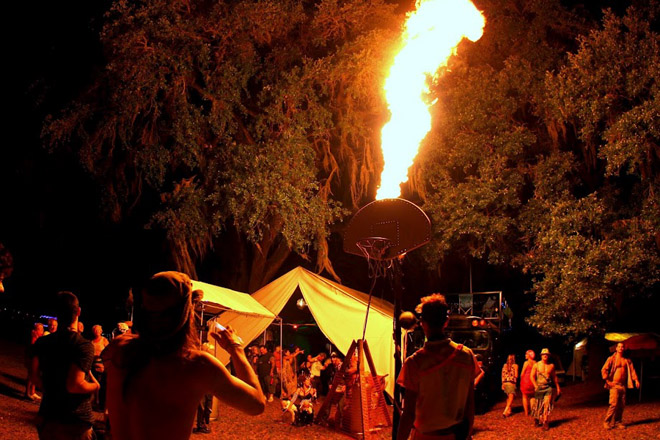 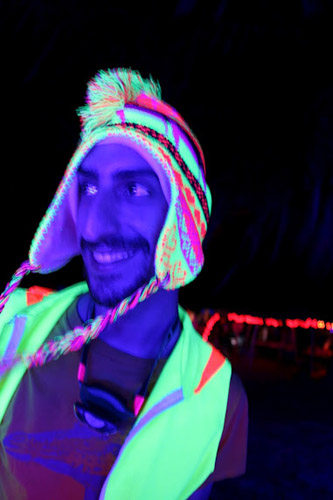 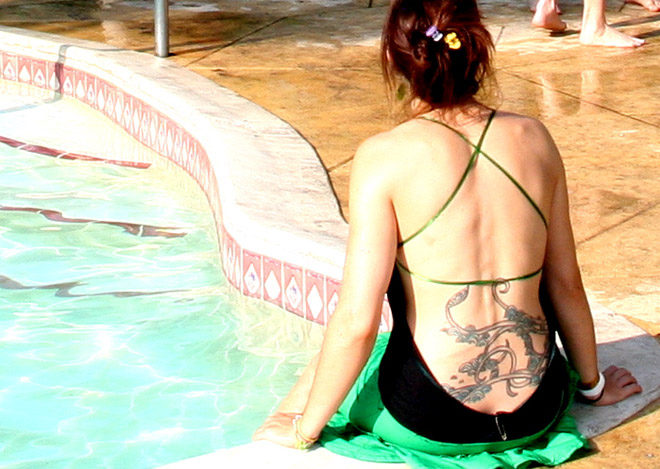 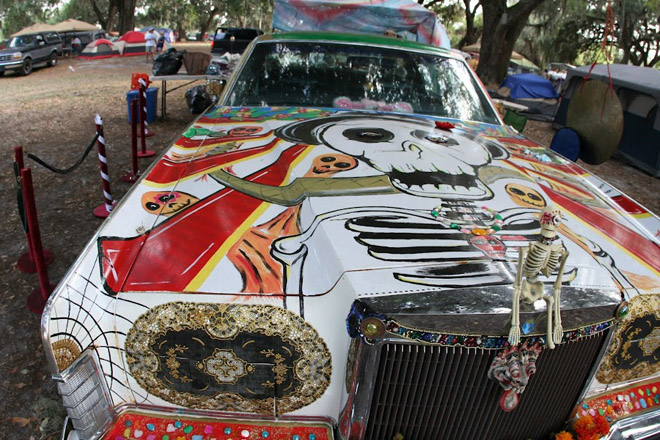 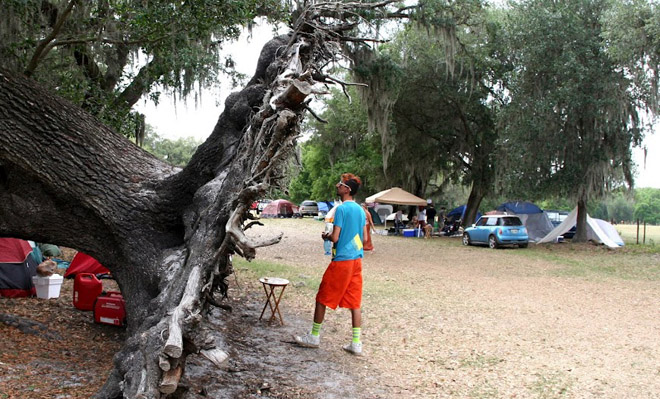 When Egypt and I moved to Florida a few months ago, we weren’t expecting much in the way of culture, and we have not been pleasantly surprised.  So it was with some trepidation that we packed up our gear and headed out to the Maddox Ranch in Lakeland, FL for Preheat; Florida’s regional Burning Man event.  One of the only things we did know about it was, that due to the minuscule amounts of rain in the previous months, there was a burn ban and no effigy would be burned this year!

However, when we arrived we were greeted with open arms and “Welcome Home!”  Preheat is located on a gorgeous chunk of land with a (dry) lake bed, huge trees, and even a swimming pool.  It’s a ranch, complete with cattle, horses, and various poultry that were constantly present around the event’s boarder and which we were instructed not to feed – although the temptation was there.  It’s location just off the highway was a little jarring to any sense of escapism, but it also meant that there were no elderly neighbors to call in noise complaints on us at 9:00pm (a common issue in Florida).  The ranch is used for other various events (burner and non) throughout the year, including Afterburn, Preheat’s sister event held in the fall.

Part of our entrance procedures was signing the Porta-Potty Pledge. The johns, pool, and showers were all attended by Guardians of the Loo, a volunteer position that provided for a better-than-your-average burn outhouse experience.

The weather bounced between sunny, cloudy, and windy; the evenings were decidedly colder than we anticipated – but nothing a few shots of whiskey couldn’t remedy.  Unfortunately, liability fears were (not surprisingly) in full force when we were told by the owner

that we could not hang our aerial equipment from the trees – which were old and presumably failing structurally.  One tree in particular had been knocked over in the past, exposing it’s enormous root system; and it had continued growing sideways!  The people camped under it’s boughs had named it the ‘Tree of Dreams,’ a fitting title indeed.

The people in attendance were from all spectrum’s of life, like at any burn, but there seemed to be a HUGE number of fire spinners and performers.  The burn ban didn’t slow them down; some people couldn’t even wait until nightfall to light up!  The effigy burn was replaced by an entertaining conclave and fireworks show.  Our campmates were all strangers, but we were great friends by the end of the weekend.  Everyone was extremely friendly and happy, there were big smiles on every face I saw.

Daytime activities included lounging at the pool, making Frankenstein stuffed animals, provocative parades, rounds of pillow fighting, all the etiquette and mustaches you could muster at Camp Serious Business, and bubbles galore at Bubble Rumpus.  At night one could dance off the morning’s bacon to DJs, live bands, and drummers at Funk Evolution, share a joke at Center Kamp Tavern – where a sign told you to ‘Go away if you’re under 21 – unless you are really hot and over 18’, shoot some hoops and get rewarded with a pillar of fire, and be among the bubbles again at the glowing Foam Dome.  At any hour of the day or night one could grab a coffee, tea, or hot chocolate at Blazing Bean Coffee – get it to go or hang out and play a board game and listen to Preheat’s radio station: WADD.  Shangri-la provided a decadent Sunday brunch and organized a pot luck for those who stayed late Sunday night – an ingenious way to help camps get rid of their extra food while basking in the glow of all that had happened that weekend.

Our favorite camps were:

Beer! Camp: These guys were awesome!  They asked everyone on the Preheat Facebook group what beer they wanted, and brought everyone’s request!  They also included a bunch of local beers and homebrews.

Burner Barbie Camp: The couple that ran this little tent brought TONS of craft supplies for you to burnerfy your Barbie: Make yourself a friend in place of the one who couldn’t come!

Preheat is a pretty small burn, which can be a good thing!  At one point, I lost a toy tarantula that we quite liked, so I put the word out: If you see a fluorescent green tarantula, get it back to the giraffe.  Sure enough, 45 minutes later it was back in my hands.  Also, “The Amazing Kenny” ran by our camp, and made me an anatomically correct balloon giraffe.

All in all, a great time was had by all.  If you need a vacation next October, come to Afterburn!  The Burnt Oranges would love to have you.