In May of last year, I had the privilege of speaking with Chris Lindland, the founder of BetaBrand. Most burners know BetaBrand for their disco pants and hoodies – an easy sell for a community obsessed with snazzy and unique digs. As things started getting ramped up for the Burn and we started going full force on the BARmag Print Issue 1, this interview got lost in the shuffle. Luckily, in preparation for BM 2013, I’ve started clearing out the BARmag vaults. I’ve resurrected this little piece to share with everyone one independent business owner’s hilarious and unique perspective on our Burn community.

BARmag: Did you ever think about doing a BetaBrand camp at BM?
CL: Hell no.  And here’s why… Folks have said we should and it gives me an uneasy feeling.   To me, Burning Man is an idea — one I’ve never experienced first hand, but an idea nonetheless.   To me, the whole point of Burning Man is take the creative reigns out of the hands of Hollywood, Madison Avenue, and Silicon Valley and build a city where creativity is the currency.   Ok, and maybe space cakes too, but not Powerbar-branded space cakes.   That’s where hip corporations — even if they’re populated with Burners — cross the line.
Were Betabrand to build a camp, surely we’d try our hardest to make it funny, but the fact that we’re a commercial enterprise would muddy the motivations enough to make it a bad influence — even though our creation would likely be a thousand foot-tall pyramid made of Vagisoft.
BARmag: How did you come up with disco pants?
CL: My old business partner (from Cordarounds.com, BB’s predecessor) created them.   We were at a fabric store in LA and decided to grab silly fabrics for sample pants.   He snagged the last 10 yards of disco fabric they owned and created the rarest, most awesome pair of pants on earth.
It took us 3 years to finally track down the Fabric’s source.
BARmag: In the NYT article you said that golfers and burners both love the pants, what other demographics are attracted to these shiny trousers?
CL: We aim to sell them to every demographic.  Peels of giddy laughter fill the office when we see folks wearing ’em in environments we didn’t expect.
BARmag: How do you market disco pants?
CL: Mainly through customer’s photos & word of month.
BARmag: Are you familiar with Burning Man’s principal of decommodification?
CL: Yes.  We originally thought people would like ’em for New Years and trips to Vegas.   Then Burning Man people discovered ’em and lots bought, creating an odd marketing conundrum — are we allowed to market these to people who really want ’em? 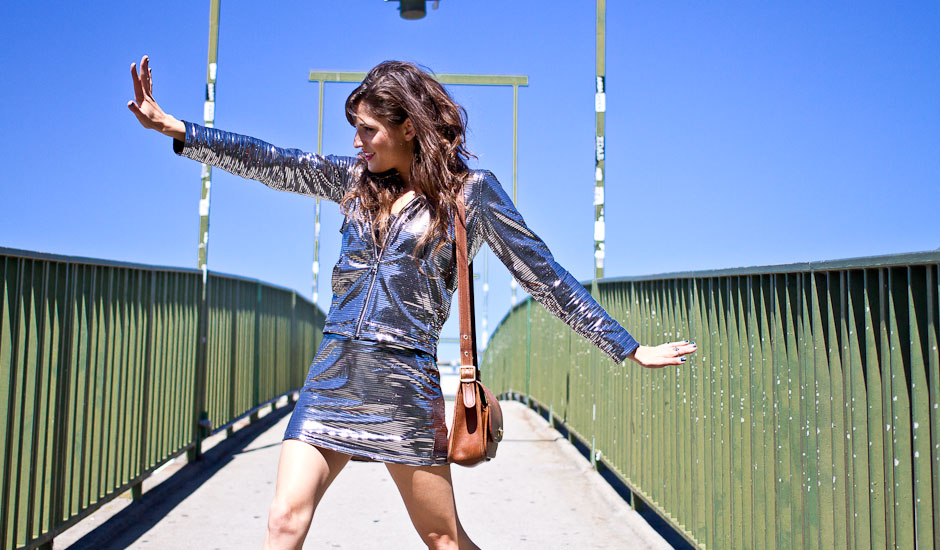 BARmag: Does decommodification effect your marketing campaigns for burner loved items like disco pants?
CL: It would become a dull story if we only marketed them to Burning Man people via Burning Man imagery.  This isn’t a case of biting the hand that feeds you.   But I think that, as creative people, Burning Man fans probably hate to see fun inventions filtered through such a narrow lens.
BARmag: Do you feel that principles like decommodification should stay on the Playa and not effect small businesses that focus on art and creativity?
CL: Tough one.  Burning Man has succeeded at creating a mass cultural movement.  Ok, perhaps not mass.  But more massive than, say, Ska music.  And Ska music had a certain aesthetic that affected fashion at the time.
As Burning Man ideas become part of a larger cultural identity, it’s hard not to see that spawning related products and services.
BARmag: Are there any other things you’d like to tell our readers about BetaBrand?

CL: Here are a couple videos we made of disco footage folks sent in (includes mermaid footage.)

One Response to “Golfers Love Disco Pants Too: An Interview with BetaBrand”