Did you see that pirate ship art car with all the lasers and fire?!

Global Glue Project was inspired by the founder’s great-grandparents who were married for almost 75 years. Gillian Pierce and DJ Pierce are the sister and brother duo behind Global Glue with founding partner Anders Bremsen. They started the project at Burning Man 2010 with the intent to “connect the world through real relationship stories one couple at a time.” From the first footage at Burning Man, their project has grown to include video interviews with couples from China, Denmark, South Korea, India, Japan, Russia, and Romania. These interviews are available on their website, www.globalglueproject.com, where they hope that “these honest accounts give others a roadmap and tools for how to navigate long-term relationships.” It’s a beautiful, genuine project allowing the viewer to get a glimpse into the magic of real love through the natural, commonplace interactions of these chosen couples. Watching only a few of these videos will evoke a swirl of emotions and a deeper level of questions and thoughts around what love and relationships actually are.

Global Glue has a wide range of couples; some have been together for 40+ years, others for only 2, there’s a healthy dose of funky burner participants and plenty who seem to be your “average american family”, there are sage-like same sex couples and many foreign partners who have been together for most of their lives. Their website states, “Four years later, the team has now filmed over 50 couples across the globe, without any discrimination of race, sexual orientation, or religious affiliation.” It’s refreshing to watch these diverse videos which reaffirm that a healthy relationship doesn’t have to look one particular way.

Another great aspect is that these partnerships aren’t all butterflies and rainbows. They talk about the real issues they’ve faced, the hard work it takes to stay together and, of course, the great reward of loving companionship in the end. There was one constant that we noticed in all the couples: laughter. BARmag interviewed Global Glue to get some more details on their project.

GGP: Burning Man (2010) was the first place that we turned on the camera and started shooting. Back then, we interviewed both single people & couples, looking more for the answer to the question: “Does love need a conservation effort?” as a means of exploring how people there felt about the importance of committed relationships being an integral part of a healthy planet.

We found out quickly that even though Burning Man has a reputation for promiscuity, it also houses a lot of advocates of long term committed love. Many couples meet at Burning Man, and many couples build traditions around attending Burning Man. It is a ripe place for love, and in general couples are more open to talk about their experiences there. So much of Burning Man is about freedom and expression, and we have been able to channel some of that energy into really powerful Global Glue interviews.

BARmag: What’s your process for finding the right couples?

GGP: Our belief is that every couple has some wisdom to share, and so far that has been true. We have not come across a couple that has not been able to offer something of real value to us in their story. The prerequisites for us are that 1) couples describe themselves as happy, 2) that their community would also describe them as both happy and have something to offer, and 3) they have a willingness to talk openly about both the obstacles that have challenged them and the glue that keeps their relationship sticking together.

Sometimes we pursue an interview with couples who we feel have a unique story to share, but sometimes they either self-select or come to us by other community members. Our preference is to film couples that have been together for more than 10 years, but we have captured some surprisingly rich wisdom from couples who have only been together for a few years.

BARmag: Have you ever interviewed a couple and decided not to use their footage afterward?

GGP: A few times, yes, but as we continue to refine our process that is becoming more rare.

BARmag: How do you choose what snippets of the interviews to use?

GGP: It’s surprisingly obvious. In the interview itself there is always a moment where we know we have captured some important nugget of wisdom. People need to warm up to talk about personal things, so we always start with asking them how they met. Those stories can be very interesting, particularly in the older couples. We typically spend at least an hour to an hour and a half filming each couple, but those interviews get cut down to 5-25 minutes for their final “Glue Film.”

Our films are formatted by chapter, so each interview is divided up into obvious “Obstacles” & “Glues”, bookended with a “How They Met” story and a “Kiss” at the end.  Sometimes we have to ask couples to expand on an idea when we know we hit one of these Glues and Obstacles. For example, if a couple says that “trust” is one of their Glues, we will then ask them to expand on that and offer an example of HOW they build trust. We aren’t only after the “what,” but we are after the how. Within the obstacles, it’s the same, if a couple talks about alcoholism or jealousy or time management, we ask them to offer the story of how they overcame the challenge. That way the content becomes a rich resource for understanding how real couples deal with challenges and issues that all relationships face.

BARmag: What is your ultimate dream goal for GGP?

GGP: Our vision statement is, “A Happier Planet fueled by Healthier Relationships.” In time, we want to become the household name for relationship wisdom. Relationships hold such fascination, and no matter where you are in the world, love and relationships are important. We hope whenever relationships are being talked about across the globe, someone in the conversation says, “go to Global Glue Project, there’s so much wisdom & inspiration there.” Within the goal of widespread recognition, we will offer a wide range of resources, including additional films, written materials, and events.

BARmag: How can people who are inspired by the project get involved?

GGP: The biggest way to support us is with partnerships, sponsorships and donations. We had a successful kickstarter campaign and reached our goal of 50K to produce 52 Glue Films, but anyone who knows anything about filming and website management knows that doesn’t begin to cover costs. We have poured our hearts and souls and savings into the project, and are still looking for ways to make it sustainable. We want to continue to film and offer more diversity in the couples we film. We are also always up for suggestions of couples to film, and we typically cover the cost of our films, but there is an option to pay for a Glue Film. A few of our films have been paid for by the couples themselves, or their friends and family who wish to preserve their love story.

BARmag: What is one surprising thing that you learned from this project?

GGP: So many things have surprised us, but one of the main things is the “action” and “choice” side of love. We were guilty of thinking that certain happy couples were simply “lucky” and found the perfect match, but even couples who are really happy also had to work at it. A lot of couples simply make it a choice to come back to each other, regardless of how they feel. It is the act of love and the verb of love that is important, not just following a feeling, as feelings ebb and flow and change over time. The other surprise is how important the small things are. The cup of coffee in the morning, or the way they greet each other at the end of the day- small every day rituals hold incredible power in relationship. Another surprise is how many couples experienced love at first sight.

BARmag: How did you choose to break the site down into: How They Met, Obstacles, Glue and Kisses?

GGP: We wanted to solve the dilemma of content overwhelm while providing a narrative structure we can replicate over time, globally.

We filter chapters by topic so that users can browse for an issue they are looking for. Some of the themes are really heavy- loss of a child, alcoholism, infidelity- things that can break a marriage. We have the dream of the site becoming both a source of inspiration as well as a lifeline for people as they deal with these things in their own relationships.

The site can be a “choose your own adventure” in this way, you can watch only “Glue” chapters, or only “How They Met” chapters, or filter based on location or years together. The content can be experienced and sorted in a million different ways resulting in what we hope to be a powerful user experience.

BARmag: Has there been any overarching themes or occurrences that you’ve noticed in all of these stories?

“Communication” in general is the most important relationship tool across every couple no matter where they are from or how long they’ve been together. But as we continue to grow our own experience we dive deeper into the question of HOW they communicate– with examples– because so many of us do not know how, even though we can conceptualize how important it may be. 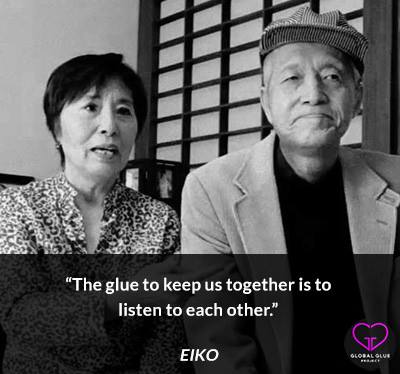 BARmag: What’s next for GGP?

We are currently working on launching our new website (before the end of the year) with much faster performance and a more streamlined design, making the user experience even more intuitive.

Snuggle up with your partner, or your dog, or just yourself and bask in the warmth of Global Glue. What knowledge can you glean that will support and deepen your relationships?