Closing the book on another successful chapter in the dust we reflect on Da Vinci’s Workshop and marvel at the lessons, the art and the community that cements further into the bedrock of our shared future. This year, numerous spectacles on the Playa caught our eye so we’ve put together this short list of some of our favorite highlights from the year. While certainly not all the gems we saw out there, these are the highlights that had us trekking back and forth across the esplanade.

Located at center camp for a reason, this behemoth model of a humpback whale was tough to miss at about 34 feet long. The body is composed of welded steel frames that are all built to house custom stained glass panels. Each of these stands alone as a smaller unique work designed by visionary artist Android Jones. To set the tone, the team showcased this big beautiful beluga with a genuine song sung by humpbacks in the wild and a heartfelt narrative about the state of our oceans.

As if the Mayan Warrior wasn’t already the most tremendous piece of sonic collaboration on wheels, this year the team kicked it up a notch with an upgraded technology and a sound system that could be heard several hundred yards away. With what probably amounts to millions of dollars in lasers and subwoofers alone the Mayan was easily spotted clear across the esplanade for its signature DJ booth that was a work of art on its own. Starring up at it was like peering into a shimmering singularity that fluttered wings of sacred geography across the night sky with lasers.

Last year the independent rendition of the popular TED series, TEDx had a series of talks at PlayaSkool but this year the educational seminars were hosted in unlikely Distrikt sound camp. The home base of heavy bass found a receptive audience in young, dust covered minds. For instance, speakers like Chip Conley talked about what it means to be a “modern elder”. De Kai discussed a technology to put artificial intelligence at the fingertips of the young; Philanthropist and entrepreneur Ibrahim AlHousseini talked about creating an eco-conscious business that can usher in a greener future for our planet. Each speaker brought with them a wealth of knowledge, which turned out to be one of the most inspiring gifts on the playa. 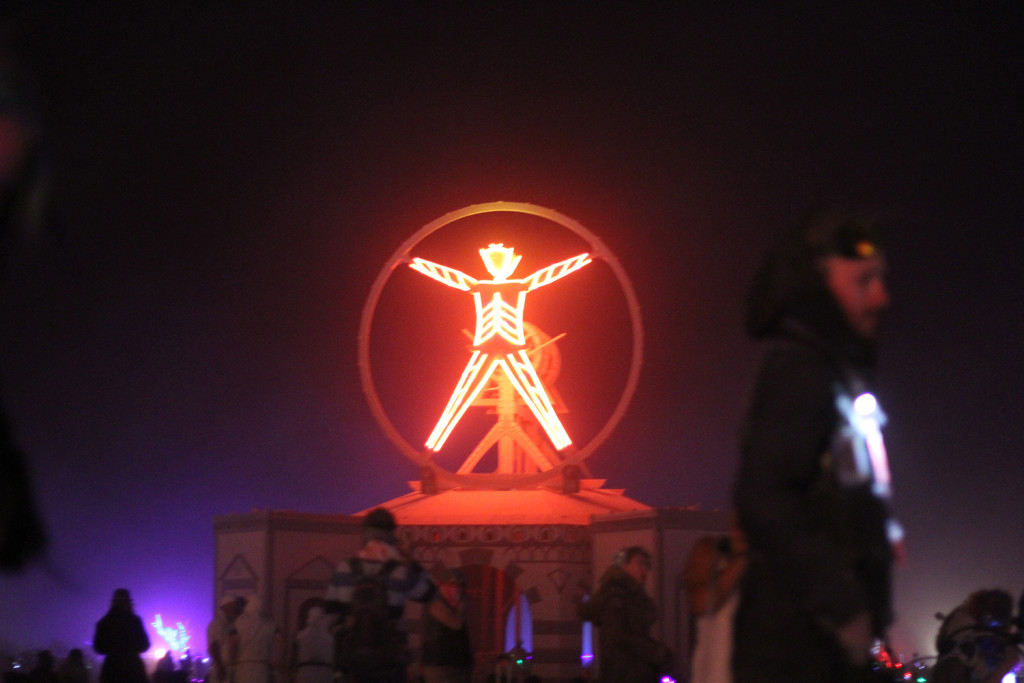 In the first ever rotating construction, the Man was planned to rotate on a vertical plane, but when the event started the man still wasn’t erected leaving some newcomers without a central point of reference to navigate the Esplanade. For builders, this experience was probably one of the most interesting nods to DaVinci’s ideas. When the Vitruvian Man design and the cluster of gears that was meant to turn him was complete, they cranked the mechanism and the entire core of the assembly torqued. For those who rode out early one dusty morning after the failed test, they may have seen the man upside down with his head detached, neatly tucked away in the back of a truck. This was followed by some more tinkering, but as Crimson Rose playfully put it, “Eventually the decision had to be made to lay him up and give him head.”

The Catacomb of Veils

In the largest burn held this year, the Catacombs of Veils were opened, closed and incinerated within a few days span leaving many without the chance to see the secrets laying within it’s mountainous wooden walls. Those who did venture inside may have heard the tranquil tones of the bells that were offered to backers of the crowdfunding campaign on indigogo. While a media darling and a favorite for many on the playa it never reached it’s crowdfunding goal, nevertheless it showcased tremendous ingenuity in a gargantuan dream.

A lucky few were able to tour the incredible Fly Ranch this year. Along with visit to the enchanting Fly Geyser and about 300 acres of glorious land. During their stay visitors got a chance to consider all the potential of a year round burning man community in this place. With the announcement of the purchase arriving only about a month before Burning Man those fortunate enough to be included in this visit will be at the apex of an important conversation about how Burning Man ethos, customs and creativity can be transmitted from our beloved ephemeral city in the dust to the default world. Read more about our experience visiting Fly Ranch here.

First it was planned to be the largest art car on the playa. Then it was decided that it should be stationary. Next it was reduced to less than half the size. However oversold or underwhelming, the 747 still made its debut on the esplanade this year and it was the first installation of its kind. Moreover, even if a dream seems too big to achieve right now, anything is possible given enough time.

When two of the biggest burner brands in the community come together it’s almost always a thing of beauty. The Robot Heart takeover at Distrikt was just such a teamup. If the 85,000 Watt sound system strapped onboard Robot Heart weren’t enough then syncing them with the Funktion One systems at Distrikt surely must be.  When these two powerhouses joined forces the foot traffic in the area slowed to a crawl partly because so many were coming out to be a part of the block party and partly because just about every passerby had to stop to discover the source of all this bassy bliss.

Perhaps the most talked about piece of art in deep playa this year was the Black Rock City Lighthouse. With four towering structures sprouting from a single foundation the lighthouse exemplified all the powerful symbolism of the sailors icon but with a suggestive organic quality infused in the architecture. Each of the structures were internally designed by different artists so they each imparted a uniquely personal character when explored. The lighthouses were connected by rigid rope bridges emphasizing the loose attachment that’s shared between us despite our differences and their plant-like construction conveyed the ongoing need for ideas that shine a sort of light that will help us grow together.

In what was David Best’s ninth and possibly final temple at Burning Man, we were able to see a structure inspired by his travels to Nepal. The facade had a tiered roof like an empirical asian temple. Like many of Best’s creations this temple was dedicated to the fallen, but not forgotten. This year, the temple was packed with messages to and about loved ones lost to spiritual scourges like cancer, war and car accidents. Among the many mourned, the temple included tributes for greats like Nicholas “Pumpkin” Alvarado and Prince. This year, the temple even housed some of the ashed of the dearly departed space man, David Bowie.

What were your top highlights from Burning Man: Da Vinci’s Workshop? Tell us in the comments below!